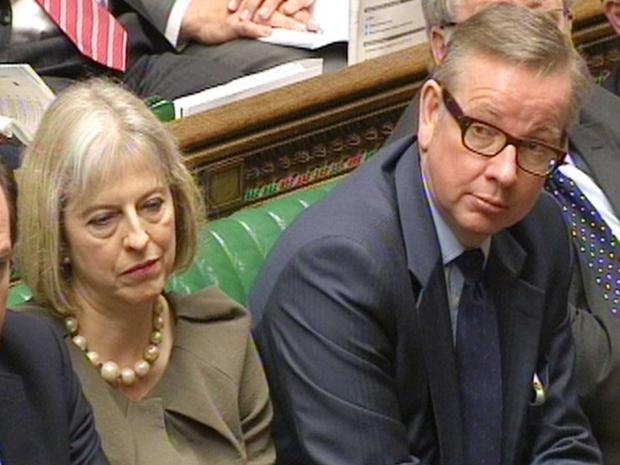 This morning on the 60th anniversary edition BBC radio 4’s Today programme John Humphreys was joined by one Michael Gove and Lord Kinnock.

During the show where Michael Gove was introduced by John Humphreys, Mr Gove made a completely unacceptable joke regarding Harvey Weinstein; making a very ill thought out comparison between the Hollywood mogul and the veteran BBC presenter.

Shockingly the remarks were met with laughter and applause not only from the audience but from the panel also.

The remarks made by Michael Gove were as follows: “Sometimes I think that coming into the studio with you John is like going into Harvey Weinstein’s bedroom.”

With the remarks being finished by Mr Gove adding “You just pray that you emerge with your dignity intact.”

Mr Gove later issued a half arsed apology in an attempt to save face but the damage was already done. 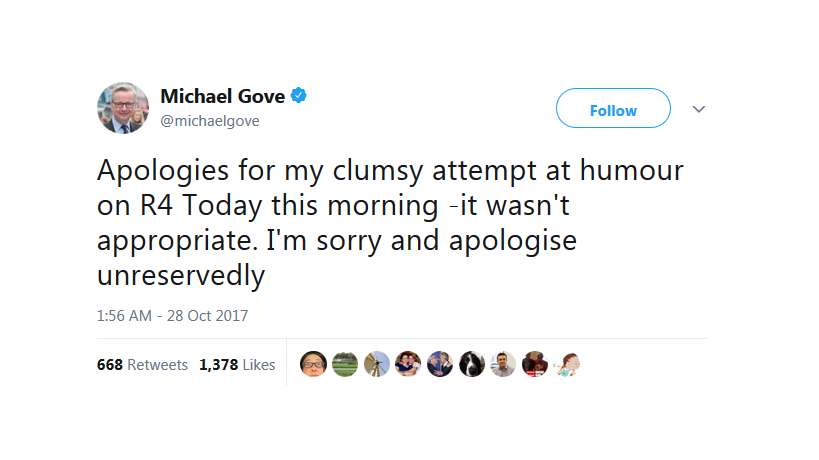 What is most worrying at the time these remarks were not met with disdain nor condemnation; rather laughter and applause. Why this is worrying is that it trivialises sexual assault and harassment. Especially when the  allegations are made against high profile individuals such as Mr Weinstein.

For a government Minister to make such disgraceful comments, in an ill thought out attempt at humour is not the worst part of this. Most worrying is the lack of condemnation from his boss, the Prime Minister; Theresa May.

These comments by Mr Gove have been made in the same week, as the historical allegations of sexist and misogynistic abuse by the Sheffield Hallam MP Jared O’Mara. Whilst initially Mr O’Mara’s apology was accepted by the parliamentary Labour Party, he was subsequently suspended by the party hierarchy pending a formal investigation following more recent allegations coming to light.

This incident also comes in the same week as the as Conservatives MP Nusrat Ghani called for an emergency debate in the commons for the remarks that Clive Lewis MP made whilst taking part in a scripted game show at a fringe event at the Labour Party conference.

The conservatives were up in arms when it was Labour MPs accused of misogyny and sexism yet when it’s a member of the house from their own ranks there seems to be an awful silence; Don’t comment and it will go away.

The difference is plain to see if it was a Labour MP making said remarks there must be a lynching by every media outlet. But a Conservative MP making said comments is duly rewarded with laughter and applause. 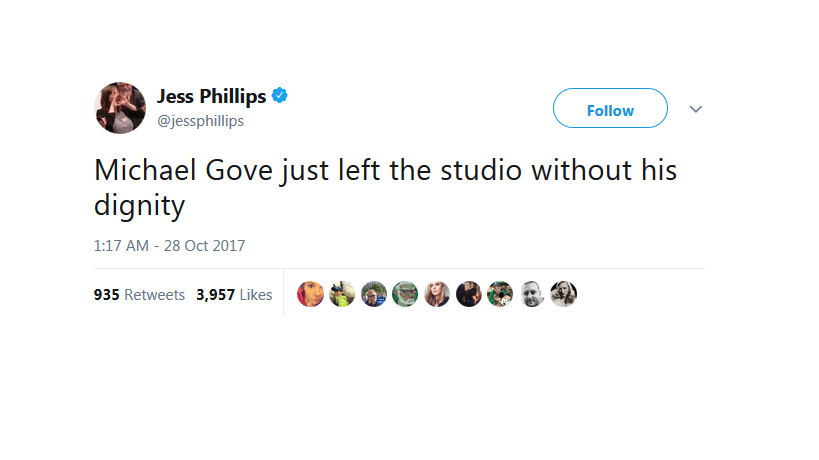 Yes he did leave without his dignity, but so has the party that he represents, as there seems to be little to no comment regarding his disgraceful attempt at “comedy”.

Theresa May as his boss, the Prime Minister and a woman should have been the first to denounce his comments and condemn them in the strongest terms but she hasn’t – why is that?

Is it because she is very busy with Brexit?

Is it because there is a growing housing shortage for working families?

Is it because Britain has an energy shortage due to our reliance on fossil fuels?

In the last few weeks we’ve had deplorable comments by Boris Johnson the foreign secretary and now these comments from Michael Gove attempting to humourise rape, sexual assault and harassment.

Perhaps the answer to that is, if Theresa May disciplines anyone in her front bench team. If she sacks them from the cabinet. If she has the party withdraw their whip and suspends them pending an investigation, then she will cause a leadership challenge which she will most certainly lose. She is not strong enough to lead her own party and she is certainly not strong enough to discipline outspoken vile individuals.

Theresa May take the opportunity now, by this coming PMQ’s condemn Michael Gove’s comments in the strongest possible terms and remove his whip and suspend him from the party. If not then the entire country will see you for the weak, feckless, hypocritical individual that you are if they haven’t already. It is not the job of the leader to only lead at the strongest and the best times but at the weakest and the worst times. The chain is only as strong as its weakest link.

So far amongst all of these incidents of allegations being tabled at MPs on both sides of the house, there has been one individual that has shown leadership and he is on the opposition bench; Jeremy Corbyn.

Theresa your silence regarding your own subordinates speaks volumes. By Wednesday that volume is likely to be a series.