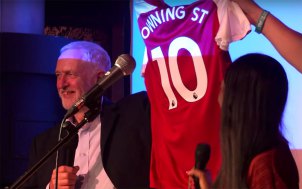 So , it turns out no one else from the team can go , (We will be supporting you back at base , go do your thing , bring us back some rock… were some encouraging noises they made) so it’s just me .

I’ve made arrangements to help out at TWT when I’m not doing my “press” thing .. agreed to meet up with several people .. legitimately requested interviews .. all sorted right ? Haha

First , I must say , what a hardworking , principled , engaging bunch of people worked at putting TWT on .

I did my bit by hoovering synergy arts cafe/theatre from top to bottom before heading off to start my interviews .

Of course everything that can go wrong usually does go wrong . Sadly Harry Leslie Smith was unwell and unable to travel so his book chat ‘Don’t let my past be your future’ was cancelled , but I met up with some people who are launching Jewish friends of Labour , so we made arrangements to do a piece on that in the near future and I had plenty of time to watch Emily Thornberry absolutely storm it at conference then stroll down to ‘New tech new politics’ with Aaron Bastani , David Harvey , Alice Bell and Paul Mason .

I knew I was going to miss Jeremy’s rally but the team said they had it all in hand to livestream and I could watch it later (things I do for you)
https://www.facebook.com/RedLabour2016/videos/522954474708002/
Sadly I only had time to interview Aaron before the audience arrived and it was starting .
https://www.facebook.com/UnityNewsUK/videos/1492150060866518/

The next interview was supposed to be Matt Zarb-Cousin at ‘Why the pundits don’t understand politics any more’ but Mark the artist taxi driver came running in bursting with righteous enthusiasm about Jezza’s rally and so the interview went to him instead (it had to didn’t it ?) I chose right I’m sure ..
https://www.facebook.com/UnityNewsUK/videos/1492266324188225/