It will be twenty years since the Good Friday Agreement brought peace to Northern Ireland on the 10th April.

It was perhaps one of the most important events of the twentieth century with many politicians coming together for peace talks and finally hope won.

Whilst some memories of the troubles will never be forgotten on both sides it meant that both sides could experience more unity than before and everyone in Northern Ireland could feel safe.

It is such a shame that twenty years on that momentous agreement of peace would require defending as it comes under attack from multiple adversaries.

In recent weeks politicians have stated that the Good Friday Agreement is not sustainable yet do not give a reason why or alternatives to keep the peace.

The Tory’s preferential arrangement with the DUP threatens the balance between the Unionist and Republican parties.

Stormont still has not reached an agreement and so Northern Ireland still has no functional assembly, with the threat of direct rule from Westminster looming.

Lastly, the open border to the Republic of Ireland is under threat due to Brexit and the government’s insistence on hard borders.

The border is an important topic relating to Brexit and to Ireland. Not only is the economic value of an open border one that greatly impacts Northern Ireland as most of its trade is to or from the Republic, but it also represents an emotional tie between the two sides of the border.

The majority vote in Northern Ireland was to remain in the EU, so Northern Ireland finds themselves losing a tug of war, whilst being dragged into a situation that they didn’t vote for, without a say in how it will affect them. Whilst at the same time it threatens the very peace process that has kept extreme violence at bay for twenty years.

All this and Theresa May goes on a tour of the United Kingdom to talk to the people about Brexit, a year before we leave but lets down the people of Northern Ireland once again.

Firstly, Theresa May’s definition of a tour of the UK is very different to many others as she visits one area in each region.

Secondly, she has shown complete disinterest in Northern Ireland in this whole Brexit process. As she stomps blindly towards a hard Brexit no matter what the consequences, Northern Ireland have been nothing but a fly buzzing around her head that she keeps swatting away.

Ireland before the completion of Brexit. 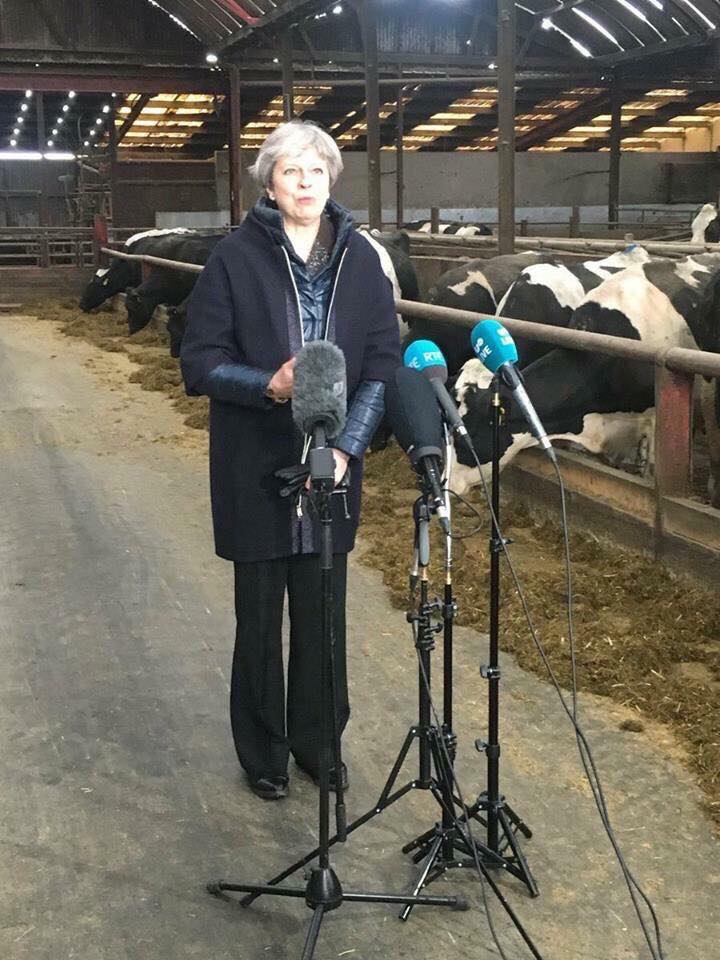 Her objective was to speak to people across the United Kingdom to talk about Brexit but in Northern Ireland she spoke to some Cows. We are all aware she thinks the people are cattle but this might be going too far.

If defending the Good Friday Agreement is as important to you as it is to us please consider signing this petition.

Many thanks to Allan Cavanagh Irish Caricature Artist for the featured image. caricatures-ireland.com