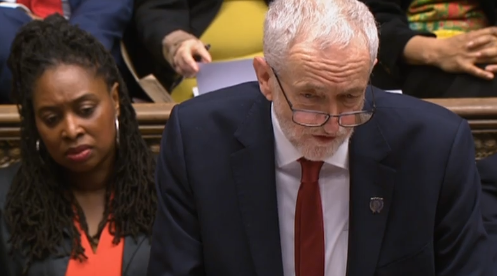 Jeremy Corbyn challenged Theresa May on Brexit today. With only nine days left until Brexit D-day we seem no closer to knowing under what terms we will be leaving. Jeremy Corbyn highlighted the “fullscale national failure” it is that the PM has no plan going forward apart from kicking the can yet further down the road in the hopes she can get more time to try to get her unpopular meaningful vote through parliament again.

As usual Theresa May failed to directly answer questions put to her and flailed through the session, throwing back attacks at the opposition instead of owning up to her own Governments mistakes and failings.

Jeremy’s first question was to ask if the PM would consider meeting with him today to discuss Brexit plans going forward, she told him it was a bit rich to ask to meet after he would not meet her.  Emily Thornberry could be heard shouting “No answer” (There never is).

Jeremy Corbyn did a good job of putting her right when she pointed accusations at him and the Labour party, making Theresa May look weak and petty in doing so.

She said that the house has indulged on Europe for too long, perhaps it has been an indulgence for her Government, who have failed to arrange terms of leaving and wasted money on Brexit arrangments in the most absurd circumstances. Jeremy Corbyn rightly said that saying that the House’s progress is an indulgence is an affront to democracy.

Jeremy Corbyn highlighted that today is 1,000 days since the referendum and all the Conservatives have achieved is chaos and more division. He went in for the kill by asking her “Will May give the public a chance to reject the deal and vote out the government?”

Overall Jeremy showed a great performance, showing confidence and leadership, holding the Government and the Prime Minister to account. Unfortunately, we learned nothing new from the Prime Minister as she avoided answering questions clearly as usual.

If you like what we do please consider supporting us here:  https://www.gofundme.com/fund-independent-media