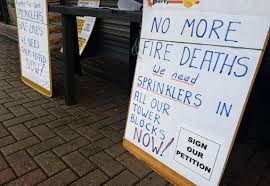 Kensington and Chelsea council just pulled the plug on funding a dispute between two wealthy families about a kid playing the piano (poor people have to pay their own legal expenses, rich ones get the taxpayer to pay them through their mates in the council).

The Carrabino and Baptista families (living in Scarsdale villas Kensington) fell out over the Carrabino’s son tinkling the ivories for long hours. since James had been in the finals for young musician of the year, extra hours bashing the dead elephant might have been expected, and the neighbours on the other side stated there was no problem yet since 2014 the above-named council spent £200,000 on a court case which they lost.

Rather than accept the court ruling they then instructed the council from three different chambers to launch an appeal. One week before the hearing and two weeks after the Grenfell fire they dropped the appeal, realising it might look bad as they had spent more money on a ‘no win’ case than it would have cost to install sprinklers in the tower block.

Kensington and Chelsea council will spend money on noise pollution for rich piggies but not on poor ones fire safety huh?