A young Corbyn supporter waited after the rally to speak with his most favourite person, after standing in the rain relentlessly chanting “Ohhh Jeremy Corbyn” for over an hour.

When Corbyn came out to meet the four year old and have a chat with him, the boy proceeded to tell him that he sings “Go away, Mrs May” at his new school.

The family were overwhelmed by Corbyn’s warm and gentle approach and after a selfie and a one to one chat, he said his goodbyes and exited in a Nissan car – not a blacked out BMW. 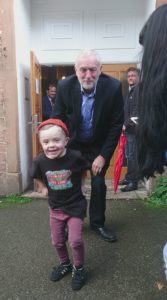