Calls for Boris to ‘Bounce’ Grow Louder as he Lies Again.

And no, we aren’t referring to the time he rugby tackled a ten-year-old child.

As Mayor of London Barmy Boris promised to eradicate rough sleeping by 2012, by the time he left the post rough sleeping had more than doubled. In 2008 he promised to install manned ticket offices in every London station, four years later not a single one remained. Perhaps we shouldn’t be surprised that a man whose career has depended on blunders and comical back peddling has lied to the people once again. This time, however, Johnson is ‘incorrectly poking’ a bear which has remained dormant since the dark days of the Cold War.

chemical weapons facility had been “Absolutely categorical” in stating that the source of the Skipral poison used in the Salisbury incident was engineered in Russia. A short while later, Porton Down’s chief executive Gary Aitkenhead released a statement concluding that they were unable to conclusively identify the source of the poison or attack. Surely there is no other way to describe such a sequence of events ? Boris Johnson lied.

Had this been Johnson’s first monumental blunder we might err on the side of caution and consider whether he misunderstood the information he was given or perhaps even whether he was misinformed by a colleague. However, for a man with so many years’ experience to incorrectly accuse a world superpower of a chemical weapons attack prior to confirmation from a technical source is utterly moronic. 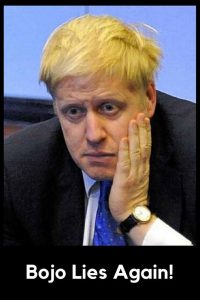 For a member of parliament, a foreign secretary no less, to blindly risk and encourage heightened political tensions with Russia on the back of false information is an insult. Especially to those who died following the questionable invasion of Iraq. The last week shows that Johnson is utterly inept in his endeavours and we conclude that he has no choice but to resign.