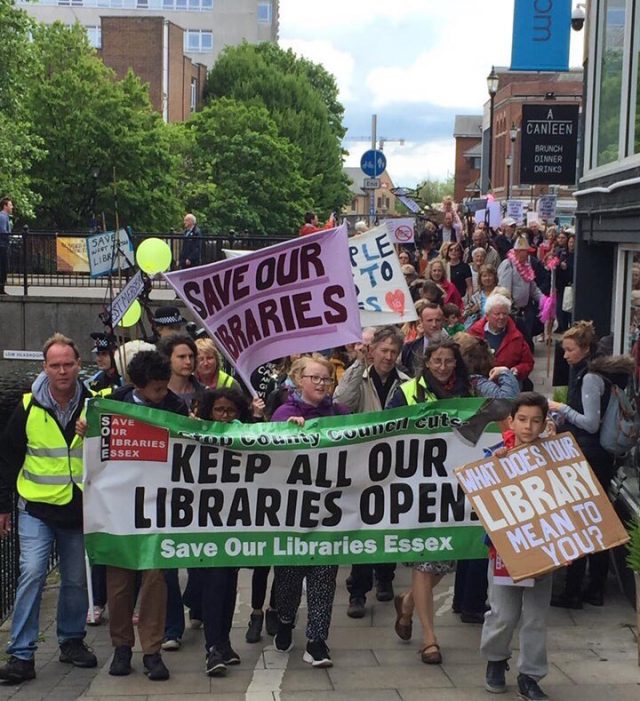 Essex Country Council’s library consultation methods were already under scrutiny but the ultimate damning verdict has now been released. A report authored by Dr. Tarek Al Baghal, an internationally renowned survey methodologist and Research Fellow at the Institute for Social and Economic Research at the University of Essex, is calling into question the reliability of the results of Essex County Council’s controversial consultation into the future of our public libraries.

The report describes the results as “questionable” citing “data quality issues”, and recommends that “further consultation” is conducted using “different questions” in order to produce more reliable results. In response to the report, local campaigners with the Save Our Libraries Essex (SOLE) campaign insisted that the Council must now act on the report’s recommendations or risk losing all public trust in the process.

The results of the consultation into the future of public libraries in Essex, which ran from 29 November 2018 to 21 February 2019, are expected to be published by the Council in the next few days. Yet those findings are already in question because of the problems the report raises with the consultation survey, including the use of “leading questions”, “complex questions, with difficult wording” and “a number of other design issues” which “could lead to possible confusion” and which together render the findings “questionable”.

Its publication follows widespread criticism of a number of problems with the public consultation, frequently raised by campaigners and members of the public during the consultation period. Campaigners claim these concerns have now been vindicated by Dr. Al Baghal’s report, and that there are now serious questions over whether the results of the survey can be relied upon in deciding the future of the counties public libraries.

In the statement release Katy Vargas, SOLE spokesperson, said “This damning report vindicates the objections that SOLE and others raised throughout the consultation period about the quality of the survey, the leading nature of the questions, and the reliability of any results generated from it. It raises grave concerns over the way the consultation process has been conducted. Add to this, the short timeframe allowed for analysing over 20,000 survey responses and written comments, and there are serious question marks over using the results of the survey to inform the Council’s final decision.”

Ms. Vargas continued: “Put simply, Essex County Council cannot rely on the results of this flawed consultation, and neither can the people of Essex. The Council must now do as Dr. Al Baghal advises and launch a new consultation based on different, unbiased questions or risk losing what little public confidence is left in this process. They should also take up Dr. Al Baghal’s kind offer to analyse the raw data from the original survey to assess its quality. If they fail to do so it will be clear that their interest is not in gaining an accurate picture of public opinion but in manufacturing a justification for decisions they have already made.”

Lorcan Whitehead, a local Labour councillor and SOLE campaigner said, “feedback to the campaign from members of the public made it clear they felt they were being led to answer in a certain way and the whole process was confusing.”

Mr. Whitehead followed this up by saying; “The public were not actually given a choice at all as there was no option to refuse cuts”. There was also a noticeable lack of options and questions about what could be done to actually improve the library services. “It gave the overall impression the decision had already been made” Mr. Whitehead added.

The cultural vandalism being suggested as if it were a reasonable action has destroyed trust in all areas of the community. Local councils in areas where libraries were earmarked for closure have been pressured by Essex County Council to admit Expression of Interest in running community libraries before the consultation results are known and without firm information from Essex County Council about any support that might be provided.

Many local councillors were unaware that Expressions of Interest were not compulsory and that Tier 3 libraries would have an extra consultation if they did not submit a bid. This would “automatically buy another year” according to Liz Miles a passionate SOLE campaigner.

Armed with this information several councils and organisations are now suspending and retracting offers put forward.

One fundamental fact that should be obvious to everyone is that the Essex County Council can no longer place any credibility on their consultation methods. “A lot of the Council’s actions have seriously damaged public trust through this process” Mr. Whitehead declared.

Speaking directly with Dr. Al Baghal, he stated: “I can’t say for sure the council was biased but I can say the consultation wasn’t very well constructed and the questions were potentially leading to results that reflected the council’s plans and very difficult. Therefore the data needs to be inspected further and we cannot accept it at face value. I am offering to do a third party inspection of that data to see if there are any problems with it. I am very willing to help.”

For any trust to be retained and salvaged Mr. Whitehead advises that the County Council must “take up Dr. Al Baghal’s offer to examine the data collected thoroughly and then follow through with any and all recommendations he makes as a result of his conclusions.”

The reactions from communities across Essex in response to the suggested cuts included book raids, marches and petitions, people have passionately fought for their local libraries. The people have risen and are shouting for the libraries they love to be saved. “I’ve had people crying in tears on my shoulder at the thought of losing their library,” said one SOLE campaigner, “it’s their lifeline.”

If they actually took notice of the actions of people across the county, listened to statements such as this, how can they choose to make these cuts and hope to retain any trust, any loyalty whatsoever? Essex resident, Jill, summed it up completely, “They don’t care, they just don’t care.”

If They Come In The Morning