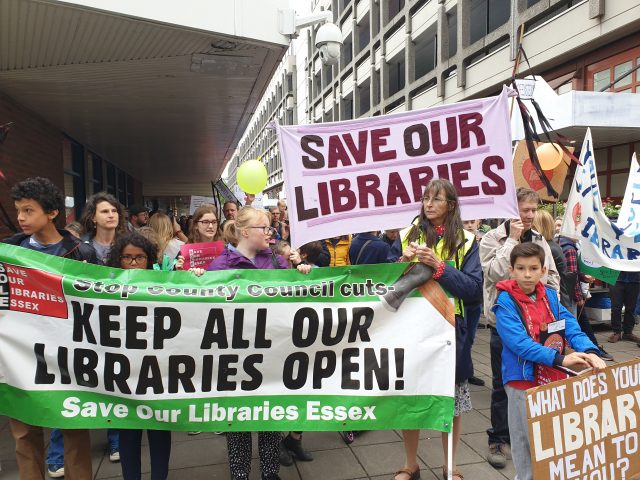 Libraries are not just important, but rather they are essential. They are goldmines of knowledge, they are children’s playgrounds where adventures take place, a hive of computers and they are crucial areas of learning for anyone and everyone.

All you need is a library card, which is a free pass to everything you could need to gain regarding fun, knowledge and carry out essential tasks such as filling in important forms. They are gathering points in the centre of communities.

Essex County Council plans to completely close twenty-five libraries across Essex in the next five years, cutting off the access to vital and familiar routes to out of school education and wisdom you can grow over a lifetime, along with the enabling internet access and computers for those unfortunate enough not to be able to afford such things in their own home even though these are practically considered requirements for modern day living.To find out what the libraries really mean to the people who use them, I reached out to the
SOLE campaigners.

Save Our Libraries Essex has been a huge and unsurprisingly incredibly popular movement collecting even a host of celebrity backers including Jacqueline Wilson,
David Walliams, Billy Bragg, Barbara Erksine and many more.

The people I spoke to were anxious to spread the word about what they saw as the core issues with the library closures, starting with the crucial fact that many people are not aware of what it means to be a tier three or even tier two library. Many, myself included, believed tier three was good news as the library wouldn’t close when the brutal truth is it’s as good as gone. Under tier three, the library will lose its buildings and all it’s facilities, retaining only two hundred books.

“Two hundred books? I’d be better off going around a charity shop!” one woman exclaimed. Another worry voiced in the same conversation was “we need adequate libraries particularly in the smaller towns and villages as travelling far and wide to do research or attend a reading class is simply a backward step that will spoil life chances” indicating the crucial role libraries play for students of all ages and children even younger, or anyone for whom English is not their first language but wishes to improve. It could even be something as simple as learning recipes when you don’t have the money spare to buy the cooking book. It quickly becomes blatantly clear when you scrape slightly below the surface that libraries are not just important assets to a community, but to individuals who rely on them as facilitations that allow them access to the most seemingly simple things.

Free computer use is incredibly important, but it is still the case that books are far from redundant. And not forgetting of course that “a lot of people don’t have scanners or copiers at home. Where would we go to get documents copied if we didn’t have the library?” Other statements surfaced again and again, such as “I can’t drive?”

“My mobility isn’t as good as it was, the library is within easy reach.”

“Where will I take my toddler to learn to read and make friends if the library closes?”

All these statements, which were echoed time and time again make it clear that a library is not just a building, but it holds the heart of the community and if you remove that library, in many ways you remove the community’s very heart itself.

Another resident stated firmly that “Knowledge is not just powerful, it is priceless. You never stop learning throughout your life but a place that allows you to learn even more is incredibly special. I may not visit the library every day it is open but I always have as many as seven books out at once and when I return one I take out another.” This statement clarifies the value of purely the books to people in the community who depend on access to these free books to learn and keep learning. Another resident made the compelling point that “research suggests many of the activities that go on at libraries actually help to decrease the risk of dementia which begs the question as to how much cases of dementia would rise in the region if libraries were removed.”

After hearing so many honest opinions that, whether informed on the situation or not, showed the obvious importance and essential nature of having a library in your community, I can myself easily see how so much uproar has been caused and sincerely admire the communities and organisers of the campaigns for keeping it as civil and peaceful as they have.

I participated myself in one of the earlier marches in Chelmsford and it struck me how even then, the libraries were bringing people who had never met together. The feeling in the midst of the march was not a scary one, rather the opposite in fact, with everyone supporting one another and having a good time because they were campaigning for something that mattered, yet keeping its peaceful environment as a part of the march.

Peace is a word that encapsulates the mood of the marches and campaigns that have been taking place, which seems very fitting as libraries are peaceful places indeed. Perhaps this should be taken more note of, as people clearly care so greatly for their libraries that they carry the spirit of them with them while protesting to keep them open.

They are in truth sanctuaries, for young, old, able and disabled, the entire community regardless of who you are, where you come from and what you believe has a place
to shelter and acquire knowledge in a calm and tranquil atmosphere.

To lose a library is not just losing a building with some books and computers in it, it is to lose a pivotal point in a community that brings everyone together. A library is, in full truth, the soul of many a small or isolated community and if that soul is torn from the community, it cannot be replaced. People will suffer.

When the campaigners were asked what communities could do to help prevent their library being destroyed some answers where interesting. They immediately stated that well-meaning groups trying to save their local library by registering an interest in it were, in fact, is detrimental as it gave the council a ready-made excuse to wash their hands of the libraries in question and then blame those who try and take over if it falls apart. In fact, if no one registers an interest it buys the library an extra year for protest and the battle to save it to carry on.

SOLE has also set up their own consultation which they are urging people to take part in. They also provide a list of the eight members who will make the final decision with their emails and are encouraging as many people as possible to email these members with their own feelings about libraries.

That is right, only eight people make the decision over every library in Essex.
To show just how well thought out the rankings are, Colchester’s second most used library is ranked as a tier four, definite closure if this ridiculous cut goes through.

Do your bit, take part. Help save your library and others too. Prevent the suffering and make it clear that these cuts will not leave the “adequate service” councils are legally obliged to provide in action.

If They Come In The Morning